Above is an CGI example I made of what the UFO might look like as it created the tunnel. 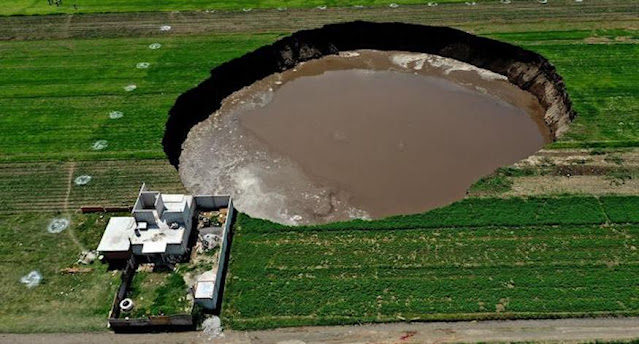 Date of event: June 2021
Location of event: Central Mexico
I have said for years that sink holes are made by UFOs exiting and entering underground bases in locations where the entrances must be instantly filled in to avoid detection from the local humans on the surface. UFOs use technology that can compress the dirt, pushing it aside, and then traveling down the tunnel…as the tunnel behind them is closed in at the same time. Its a method that aliens often use to avoid the tunnels from being detected. However this one failed to fully fill in and caused a collapse which could eventually engulf and swallow the house near it. If we were to drill a hole 6km below this very tunnel…we would find a thriving city underground with around 5,000-10,000 alien residents. We UFO researchers have long known about the UFO bases below Mexico due to the huge amount of UFOs recorded entering and exiting the Colima and Popocatepetl on live cams over the last ten years. This hole is absolute proof that I was right about the alien base exiting below Mexico.
Scott C. Waring – Taiwan